So we didn’t record every awe-inspiring moment of the last week, but we caught enough to relive parts of our week long “AWOL” adventure that we’ll never forget. We find ourselves incredibly fortunate, and eternally thankful for the life we live, with incredible people, family, and a life long buzz. “Affinity Wellbeing Off Limits” creates the best memories. Thanks to everyone who was part of this adventure, much love to you all and a massive congrats to Dan and Fran who got engaged on it, and Duncan who smashed his first Iron Man in Affinity colours. We’re so chuffed to have shared that special moment with all you guys. Until next time… x

We just want to say how totally blown away by the photos we’ve been sent and uploaded for Body Beast Summer 2016. It takes a lot of confidence to do that. You should all be proud as, we know we are! It’s crazy to think that only 8 weeks ago this journey started, and now at its end, you guys are set for a new beginning, pushing forward with your goals, doing so with new bodies and knowing that in turn you’ll have an impact on those closest to you too. Its been one hell of a ride. Actually feel emotional looking through the photos, the results of our hard work to come up with a system thats inspiring, while fun and achievable, one that actually helps to reduce illness, increase performance and works on all levels, but its your pure determination to succeed though Body Beast that makes it undoubtedly the best programme around for personal growth, development and change.

This Summers “winner” is Adam Dembski, 7 out of 8 weeks Adam was top of our ‘leaderboard’ smashing every daily challenge with ease from training religiously at CrossFit UVA day in and day out with us, drinking at least one litre of water for every 29.48kg of his bodyweight, walking over 11,000 daily steps and sleeping between 7.5 – 9 hours. And that was just for starters, that he signed up for Man Vs Mountain as part of the “challenge yourself” week and smashed out 1000 consecutive CTF burpees should be commended/committed. Your photos speak 1000 words Adam, well and truly deserved, so proud to have you as part of Affinity. Below is his small synopsis on his journey.

“For me the BB experience started as something I signed up to do mainly because of Anna who was extremely keen right from day 1.
I have to be honest with you initially I wasn’t as keen as her but that is because I didn’t realise what is it truly all about. Thought of it as “a diet” initially and I had a strong perception that I was already eating quite well so didn’t realy need it.

I was wrong……..I realised that very quickly , few days in and I began to get the clearer understanding of what it’s all about which for me was:

1. Challenge your discipline – food less of a challenge as I enjoy cooking so experimenting with new ingredients was quite fun, not having a drink for 8 weeks though is something I never done before; not heavy drinker but I love wine and this was a challenge , as Anna said on one of the posts “the wine rack was never so freaking full for freaking so long !”
Without BB I would never have had enough strength, stamina and motivation to eat clean and not drink every single day of the 8 weeks !

2. Boost your energy – haven’t felt as good for a long time on all levels, physically and mentally, have a pretty stressful job at times but it doesn’t impact me in the same way it used to anymore , I also noticed I can now fit in more into a day and that is with extra training sessions too !

3. And in consequence live a better life

Aaaahhh forgot, I now go on beach holiday to Spain for 10 days so having a better shape is a bonus!

Thanks very much to both of you for continued advice and support!”

Although theres a winner, we can’t take away from anyone else what they achieved too, Adam wasn’t alone, he just won a public vote, and will pocket a nice little nest egg.

And now for the twist… as ever we always announce our Body Beast winner at our Summer Party, but this year with the winner having already been announced you may ask whats left? Acouple of weeks prior to our Party on 17th of July after the Frome Half Marathon, we’ll be asking you to send us ‘Before and After’ shots from either when you first started Affinity, your first Body Beast or from the start of this one just ended, along with photos of you then! Again there will be a public vote to determine the overall victor of “Body Beast” as it currently stands. That winner will receive a special prize! To take part you must have done the most recent Body Beast with us 🙂 Good luck, and keep at it!!

Well done everyone and until next time ‪#‎untilvictoryalways‬ 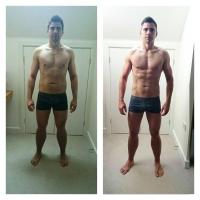 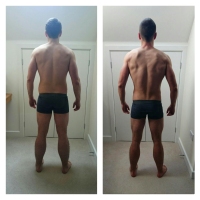 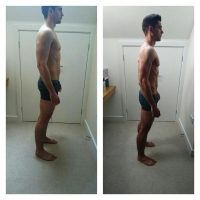 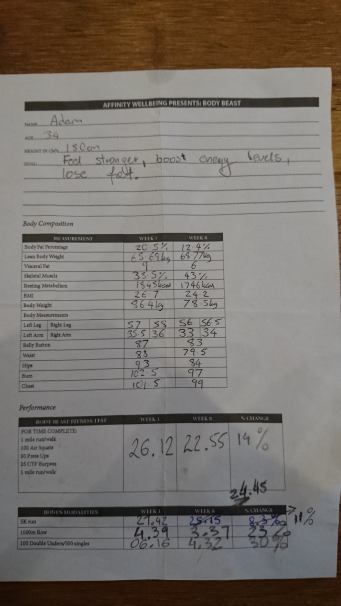 At Affinity the purpose of why we do, what we do and how we do it, is to inspire you and make your dreams and goals a reality. It’s that simple.

Everything we do, we believe in challenging the status quo. We approach and think things differently. How we do this is with proven training protocols, positive affirmation, undivided support and encouragement. We are a great coaching facility that always has your goal in mind.

We will offer you the most extreme, proven training methods from all over the world, some are incredibly old, some are borrowed and some we have created ourselves. We train to improve Cardiovascular/respiratory endurance, Stamina, Strength, Flexibility, Power, Speed, Coordination, Agility, Balance, Accuracy.

We understand each individual is unique with varying lifestyles, bodies and goal sets. You will be part of a group of dedicated individuals, and the spirit and attitude of this team helps drive Affinity.

With a range of unrivalled training sessions, wild runs and action adventure weekends, there is always an option to suit you no matter what your fitness levels are or age is. Choose to train with us and never look back.